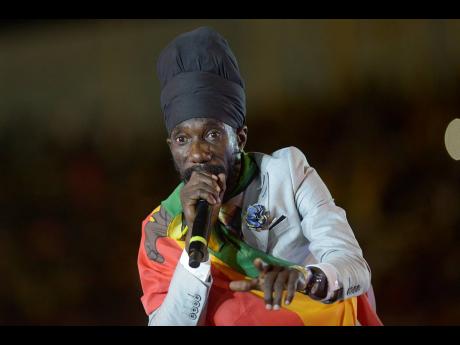 Reggae star Sizzla has weighed in on the ongoing ganja legalisation debate with his recently released single, titled Free Up.

The legendary artiste says that ganja should not be classified as a dangerous drug.

"Ganja should not be considered as a controlled substance because it does not have the destructive effects that heroin, crack, cocaine or some of the prescribed pharmaceutical drugs have on people who use them. Ganja is a medicine; it is a holy sacrament. Rastafarians and other people have been using it as a sacrament throughout the ages. Ganja has healing properties. It saves lives; it does not destroy lives," said Sizzla.

Jamaica in 2o15 decriminalised the use of marijuana in certain circumstances. Under the amended Dangerous Drugs Act, the possession of two ounces, or less, of ganja is a non-arrestable, but ticketable, offence attracting a fixed monetary penalty. There is also a scheme of licences, permits, and other authorisations which enable the establishment of a lawful, regulated industry for ganja for medical, therapeutic and scientific purposes. The law also allows the minister to authorise any person who is an adherent to the Rastafarian faith to grow marijuana on lands designated by the minister to grow ganja.

Sizzla, while acknowledging the impact of the change in the law, said that there is more to be done.

"Jamaica has made some big steps in recent times with the decriminalisation of ganja, but a lot more needs to be done, or else we'll always be lagging behind the other countries that are profiting from the ganja business," he said.

Through Free Up, the Smoke the Herb hitmaker is again advocating for radical ganja reforms. Free Up was produced by Rohan 'Fyah Fashion' Robotham and Paul 'Titus' Green on the Chess Boxin rhythm for R.A.R. Productions.

" Free Up is a powerful song. Its message is relevant and important. R.A.R. Productions is 100 per cent behind this song. We recently shot a video for Free Up. The video was directed by G Mac. We're going to release it later this month," said Robotham.