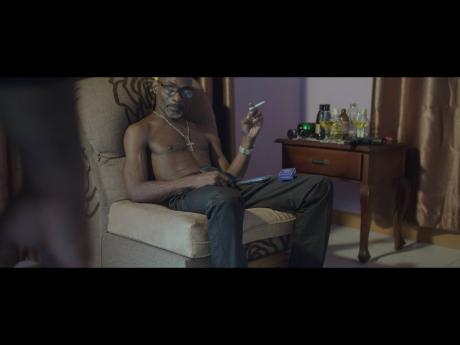 Bad Boy Trevor in a scene from ‘Demons Run Miami’.

An "edgy Jamaican gangsta girls movie", the promo says that it tells the tale of a set of young girls who were abused by a notorious sex trafficking gang in Miami. The story follows their escapades as they form an all-female gang.

Bad Boy Trevor, who has been doing online theatre during the pandemic, said he was approached by the producer in 2019.

"He sent me the script and I loved it! It has a nice storyline and it's something that can be related to. With all the human trafficking that is going on in the world, to me it's a eye-opener. I am in the exotic club industry and because I hear a lot of these stories, it makes it easy for me to adapt to the script. And the cast and crew all have a story to tell. It's like reality," he told THE WEEKEND STAR.

A Dre Flawwless Films production, Demons Run Miami was written and directed by Wesley Johnson, CEO of the company.

Johnson says he wants to send a message about violence against women and to remind people that it is wrong and should never be tolerated.

"It's for those who enjoy an action-filled Jamaican/Miami movie with beautiful, provocative women doing damage while sending the message 'stop violence against women'. That's definitely something to look forward to. I also wanted to empower my women. Women are very strong and the most beautiful of God's creations and we need to honour them," Johnson explained.

For Bad Boy Trevor, who plays Murdock, the alleged leader of the sex trafficking gang, there was one scene that really stood out for him.

"When I murdered a man with a machete I had to think real hard and try to come to grips that it's a movie and not reality," he said.

With a budget of US$25,000, the flick has been in the making since April 2020. The majority of the film was shot in South Florida, between Miami and Fort Lauderdale, with some key scenes shot in Portmore and Kingston, Jamaica.

The cast also includes Shanekia 'Suspense' Morrison and Britney Hemmings, the female lead who died in a car accident on September 17. The movie's premiere, set for January 1, 2022, at Cowboy Ranch in Kingston, will be in her honour and memory.