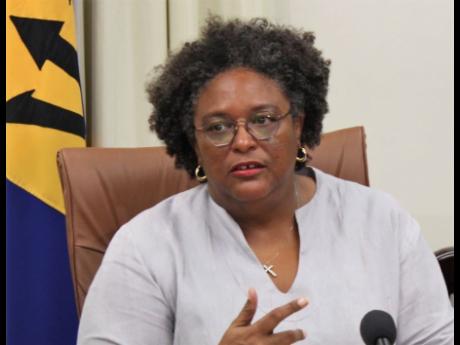 Bridgetown, Barbados (CMC)— Barbados estimates that the coronavirus pandemic has set back tourism-dependent countries by as much as 20 years and is calling for natural disaster clauses to be written into agreements between small island developing states and their borrowers.

Prime Minister Mia Mottley agreed with the Managing Director of the International Monetary Fund (IMF), Kristalina Georgieva that the tourism-dependent countries have been among the hardest hit by the pandemic that has severely impacted regional economies as well as caused a trail of death and high numbers of patients in hospitals.

“Let me put it in even further context – the only countries that have been worse hit than us last year are war-torn countries. Our declines have been double-digit in most instances in the Eastern Caribbean; they hover around 18, 19 per cent,” Prime Minister Mottley said, during an IMF forum on Natural Disasters and Climate Change.

Mottley, who was joined by other world leaders at Wednesday's forum, added “so this thing has reversed us at least by a decade in terms of nominal terms, but more like two decades in terms of real losses”.

The Barbados leader told the forum that as long as natural disaster clauses are not written into agreements between small island developing states and their borrowers, unfortunate natural disasters, and more specifically pandemics such as COVID-19, will continue to trigger adverse effects on these economies which will not have the flexibility to cope with such incidences.

“The absence of those clauses have meant that many countries literally have put at risk their capacity to have an environment of certainty as to how they go forward, largely because the increased debt that has come during the process of the pandemic has come on what existed before.

“That is why I believe there was an attempt to help the Debit Service Suspension Initiative, but for many middle-income countries who are small-island developing states, or who are not capable of relying on international capital markets, this became an issue for us,” Mottley told the forum.

She said that although Barbados was among countries lucky enough to have such agreements with lenders, the lack of foresight into a possible pandemic situation, and thus no clause for it, has placed the island in a precarious situation, in terms of its economic standing for the next several years.

“If we had had it [the clause] with the pandemic, we would have been able to remove, on average, seven to eight per cent of our own GDP in terms of fiscal space, to meet the concerns. Our debt has gone from 177 per cent to 118 per cent, and it has gone back up now to 152 per cent, largely as a result of the pandemic.

“The majority of that – 30 percentage points of that – is not because of increased borrowing but because of contraction of our economy,” Mottley said, noting that although G7 countries such as the United States, Canada, France, Germany and others have promised to deliver roughly one billion vaccine doses to smaller nations that are still trying to come to grips with pandemic and the resulting stagnation of their economies, not enough attention is being placed on the climate crisis and the debt that smaller countries are still trying to cope with.

“The notion that you are going to give one billion vaccines by the end of this year does not help countries who are tourism and travel dependent, and who have to open back up their economies because they face either economic implosion if they keep their borders closed, or literally the virus running rampant and causing too many people to die on our shores,” the Barbadian leader said.

“When we see these big ticket items at the helicopter level, when you drill down and ask what does that really mean for these countries, you begin to understand that it does not move the needle very much. That is why I believe that the Resilience and Sustainability Trust that [Georgieva] is trying to do, is the closest thing that comes to where we needed to be.”