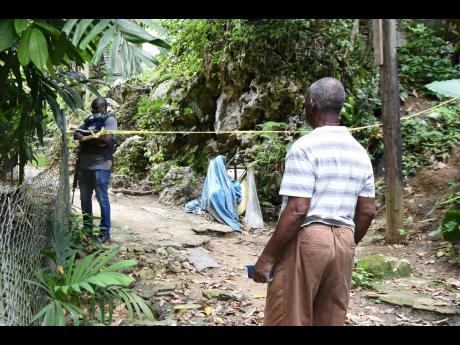 A resident, reportedly the grandfather of one of the victims, looks on as a policeman monitors the cordoned-off crime scene in Hashburn, off Brooks Level Road in Stony Hill. 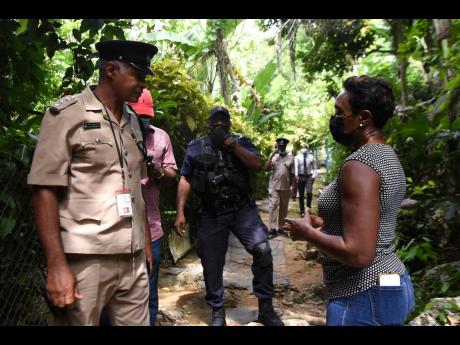 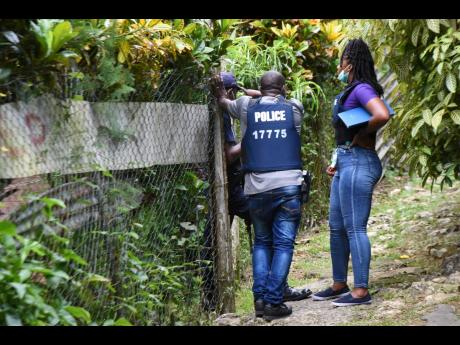 Police personnel on the scene of the shooting that took place about noon.
1
2
3

The community of Hashburn, off Brooks Level Road in Stony Hill, was the scene of a brutal slaying of three young men yesterday afternoon.

About noon, residents heard several explosions coming from Hashburn. The three bodies were seen lying in a yard on the lane. Two of the deceased have been identified as Adeai Jah 'Adi' Lawes, 17, and Brandon 'Gussie' Scarlett, 20. The third man has only been identified by residents as 'TK'. Lawes was previously held and charged for illegal possession of a firearm. The shooting comes after Monday's murder of another Stony Hill resident, Dave Nooks, at a bar just metres away from where the men were killed yesterday.

Head of the St Andrew North Police Division, Senior Superintendent of Police Aaron Fletcher, says this triple murder is believed to be a reprisal for Nooks' killing.

"The deceased on Monday is an uncle of one of the players in a gang conflict involving two rival factions, the Nooks and the Dennys. We have reason to believe that the men today were targeted because they are believed to have been intimately involved in the killing of the man on Monday," he said. Fletcher told THE WEEKEND STAR that the three men are aligned with the Denny gang. Fletcher says that policing the area can be difficult.

"In the instance of today's incident, the community in which the men were killed is far detached from the well-established community, the main thoroughfare or the town centre," Fletcher said. "It is not the space one would ordinarily get a unit deployed to patrol because there is no real issue of crime within the community. It is that these players know they are intimate with the environment, they know the space inside and out unlike the police and they use it to their advantage." He encouraged persons with information to come forward.