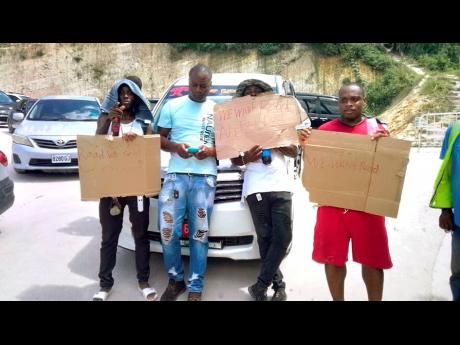 The cabbies say the road has been in a deplorable state for about 10 years. 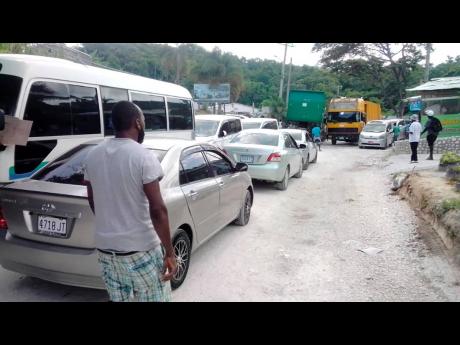 Yesterday, dozens of disgruntled taxi operators who ply the downtown Montego Bay to Johns Hall route in St James protested about deplorable road conditions that they say they have been dealing with for 10 years.

The taxi operators say the road is costing them hundreds of thousand of dollars to fix their vehicles. One taxi operator, who gave his name as Lincoln Carroll, told THE STAR that they will continue to protest until they get some form of feedback from their Members of Parliament Edmund Bartlett and Marlene Malahoo Forte.

"This morning we withdraw taxi service because wi tired a the poor condition a Johns Hall main road. From dung a Friendship come straight up back to Hurlock Road, it's in a poor deplorable condition. Trust mi, wi a suffa from this fi more than 10 years," Carroll said. "Wi tired a it. It naw work fi wi. Wi caa get fi run taxi peacefully. People cah get fi go a work in time sake a the road conditions. It a spoil up wi vehicle an wi tired a it."

Carroll further stated that recently, taxi operators started another protest and workmen were sent only to lay marl on a small section of the roadway. But since then nothing more has happened.

"Dem come one day come do a little thing and rain come and mek it worse. Dem naw do nothing fi wi an this morning wi come out an wi tired a it so wi decided that wi naw really block the road, but wi a hold a protest fi see who a come talk to wi. An trust mi, if nobody nuh come, trust mi, tomorrow wi a protest pon a much tuffer level," the angry taxi operator stated.

Hundreds of residents were left stranded as the taxi operators withdrew their services, forcing persons to either return home or walk miles to reach work.