Mahogany to burn rivals in Kilowatt 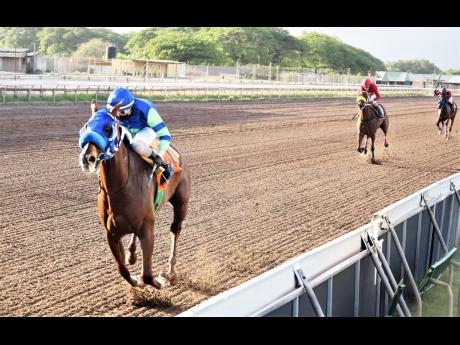 Mahogany, with Dane Dawkins aboard.

MAHOGANY is still in his comfort zone, going seven furlongs in Saturday's Kilowatt after decimating rivals, clocking 1:05.0 at five and a half furlongs in last month's Betting, Gaming and Lotteries Commission trophy race.

The speed demon ripped splits which left PATRIARCH and stablemate GOD OF LOVE wondering what hit them, leaving nothing but exhaust in an eight-length victory.

Returning at topweight 126lb, going a furlong and a half longer, should have little effect on MAHOGANY, who flirted with track records at eight-and-a-half and six-and-a-half last season. There is absolutely no speed in the event to worry MAHOGANY, which is bad news for Gary Subratie who is hoping to run a relay for SENTIENT.

Subratie, who should soon be knocked from his second-place perch in the trainers' stakes race by Jason DaCosta, has flung in long-speed American filly, AWESOME TREASURE, putting up lightweight claiming rider Jordan Barrett with 104lb.

A similar tactic was tried at a mile in the August 28 She's A Maneater Trophy against KING ARTHUR. AWESOME TREASURE turned back DOUBLE CROWN but had no answer when KING ARTHUR pounced, leaving stablemate SENTIENT to fend for himself inside the last furlong.

MAHOGANY is light years faster than DOUBLE CROWN, which spells trouble for Subratie's pair, as well as DaCosta's EAGLE ONE, who is simply too close in the handicaps to have a chance. Sitting level at 123lb with SENTIENT, EAGLE ONE can neither lead nor finish effectively at seven furlongs.

SENTIENT needs a collapsing pace at seven furlongs. He enjoyed himself against ROY ROGERS at seven and a half in overnight allowance a month ago. This time around, he faces a scorcher.