Djokovic back in Serbia after deportation 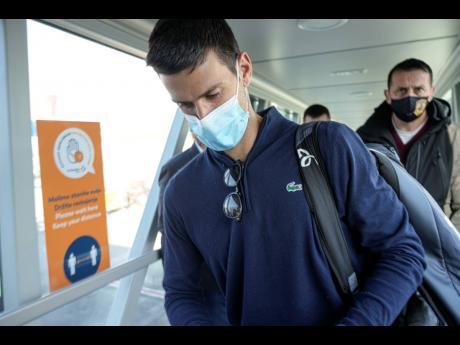 Novak Djokovic checks his documents after landing in Belgrade, Serbia, yesterday. Djokovic arrived in the Serbian capital following his deportation from Australia on Sunday after losing a bid to stay in the country to defend his Australian Open title, despite not being vaccinated against COVID-19.

Novak Djokovic returned home yesterday after being thwarted from defending his Australian Open title only to face a new predicament: He could be barred from the French Open this year, too, if he's still not vaccinated against COVID-19.

A plane carrying the No. 1-ranked player touched down in his native Serbia, closing at least the first chapter in a dizzying drama that has resonance in the world of elite sports, Australia's pandemic politics and the polarized debate over the coronavirus shots.

A handful of fans waving the Serbian flag greeted him at Belgrade's airport. Djokovic has an almost iconic status in Serbia, and many there felt he was poorly treated by Australia.

But his troubles may not be over yet: He could be barred from the French Open this year, under a new law intended to exclude the unvaccinated from stadiums and other public places. Much could change between now and the start of the Grand Slam tournament in late May, but that raised the spectre that the recent saga in Australia would be not just a blip but an ongoing challenge for the athlete, who is increasingly being held up as a hero by the anti-vaccine movement.

A member of the French Parliament, Christophe Castaner, said that the new law will apply to anyone who wants to play in the French Open - a reversal of earlier plans to create a 'bubble' around the tournament.

"To do your job, to come for pleasure or leisure, to practise a sport, it will be necessary to present a vaccine. This will be valid for people who live in France, but also for foreigners who come to our country for vacation or for a major sports competition," Sports Minister Roxana Maracineanu told BFM television yesterday.

Djokovic acknowledged that he had attended an interview in Belgrade in December with journalists from L'Equipe newspaper after testing positive for COVID-19. He later described this "an error" of judgement.

Asked if he would face any penalties for flouting his isolation, while being infected, when he returns to Serbia, Serbian officials said he would not, because the country is not in a state of emergency.

Djokovic is a national hero in Serbia, whose president had called the court hearing in Australia "a farce with a lot of lies".

"Novak, welcome home, you know that we all support you here," said Snezana Jankovic, a Belgrade resident. "They can take away your visa, but they cannot take away your Serbian pride."