Royals snatch win at the death 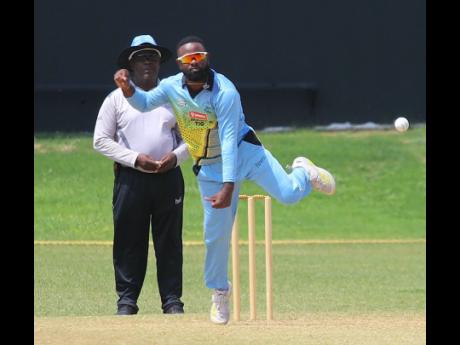 Man of the Match Left-arm spinner Ryan Francis of the Surrey Royals in action after picking up four for 17 against the Surrey Kings in the Dream11 Jamaica T10 competition at Sabina Park in Kingston on Thursday.

The Surrey Royals defeated the Surrey Kings by eight wickets in their seventh-round Dream11 Jamaica T10 clash at Sabina Park on Thursday.

Captain Javelle Glenn was the hero with the bat, hitting the final ball of the innings for a six to secure victory after the Royals chased down the 100 runs needed for victory for the loss of just two wickets.

The Surrey Kings first posted 99 for seven in their allotted 10 overs, with left-arm spinner Ryan Francis doing most of the damage, bagging four wickets for 17 runs in his two overs.

Francis picked up the big scalp of West Indies batsman Jermaine Blackwood for 12, then removed Jamaica Scorpions rookie batsman Kirk McKenzie for a top score of 25.

Francis then snared the wickets of Oraine Williams (10) and Brad Barnes (8) in restricting the powerful Kings line-up.

Andre McCarthy chipped in with 22, as Nicholson Gordon weighed in with two wickets for 18 runs.

In reply, the Royals took a sedate approach to the run chase and got to 77 for one in the ninth over, before Leroy Lugg fell for 35 from 28 balls.

When Pete Salmon fell to Shalom Parnell for seven off the first ball of the final over, the Royals still needed 16 runs to win. It was then over to Glenn who hit a six, then a four, and then sent the final ball of the innings into the car park to seal the victory.

Player of the match Ryan Francis, while pleased with his performance with the ball, praised the efforts of the batters for getting over the line.

"At no point were we nervous at getting this target. We know we have a long batting line-up and we have the firepower and power hitters who can do the job," he said.

The Royals are now on 12 points from seven games, four points behind the Kings who still lead the standings with 16 points.

In the opening encounter of the double-header, the Middlesex United Stars defeated the Cornwall Warriors by 48 runs.

The United Stars first made 120 for three, thanks to another brilliant innings from captain John Campbell who scored an unbeaten 69 from 35 balls.

In reply, the Warriors totalled 72 for eight, with Derval Green top-scoring with 15. Ojay Shields took three wickets for 19 runs, with Michael Thompson bagging two for 16.