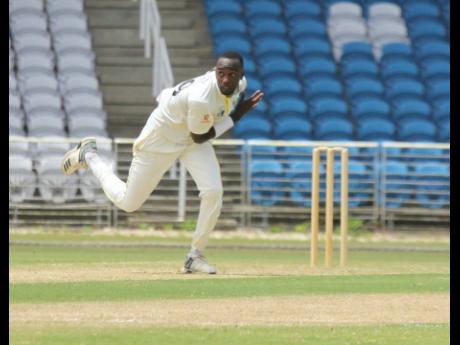 Coming into the attack, Mindley resorted to a nagging line and length on the seaming BLCA pitch to snare match figures of five for 20 from 12 overs, as the Volcanoes were dismissed for 137, after which the Scorpions replied with 118 for four at stumps.

After Nicholson Gordon took care of the opening pair of Devon Smith and Kimani Melius, Mindley started his demolition job by removing Alick Athanaze, who was caught behind for six.

Kavem Hodge was his next victim, as Brandon King took the catch to send back the Volcanoes skipper for 23.

Mindley then trapped West Indies Under-19 captain Akeem Auguste for three to leave the Windward franchise on 68 for five at lunch.

On the resumption, Mindley kept plugging away with his full-length deliveries on and about off stump, and that strategy would bring about his fourth wicket when he had Kenneth Dember caught behind for 11.

He then rattled the stumps of Sherman Lewis for a duck.

For Mindley, the hard work leading up to the third round is paying off, and he is relishing the opportunity for more success.

"I aim to get 25 wickets at the end of the season and I have 14 now, but I am really pleased with my bowling effort today as I had to be patient and bowled a full length which worked out pretty well," he said.

Having done well with the ball, Mindley will have to show some form with the bat, as he is set to resume today on one not out after coming in as a night watchman.

The Scorpions are set to resume on 118 for four, thanks to a knock of 48 from captain John Campbell and 36 from Leroy Lugg.

The opening duo, who had a couple of let-offs in the field, put on 71 runs for the opening wicket before Campbell was bowled by pacer Josh Thomas and Lugg was sent back by pacer Sherman Lewis.

Nkrumah Bonner could only get two runs before Preston McSween picked up a wicket after having a couple of catches going down off his bowling.

Late in the day, Jermaine Blackwood drove loosely at McSween and was caught at cover for 26 to leave the Jamaicans four wickets down, still trailing by 19 runs on first innings.

Over at the Queens Park Oval, The Guyana Harpy Eagles closed day one on 219 for four against the Barbados Pride. Tagenarine Chanderpaul is not out on 64, while Tevin Imlach made 53. Akeem Jordan has so far taken two wickets for 50 runs.

At the Diego Martin Sports Complex, the Leeward Islands Hurricanes reached 308 for seven against the Trinidad and Tobago Red Force. Opener Kieran Powell hit 139 with Amir Jangoo getting 58. Jayden Seales has so far bagged two for 35.