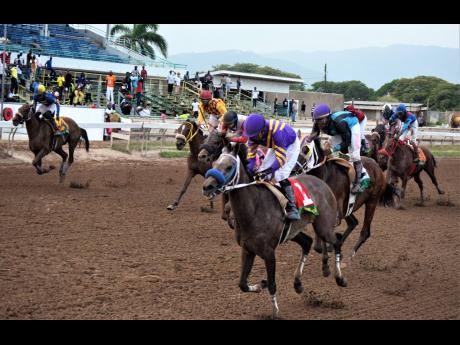 AMY THE BUTCHER closed out four winners for Dick Cardenas and a three-timer for champion trainer Anthony Nunes, scoring a textbook length-and-quarter victory in the Labour Day Trophy at seven furlongs yesterday.

Running the rail throughout, after breaking sharply from post-position one, Cardenas made his bid with the 6-5 favourite three furlongs out to pounce on three-in-a-line ALEXA'S DREAM, SUPER DUPER and TAURUS BOY at the top of the straight.

Though up in class among non-winners of four races, the four-year-old filly ran like a pro at the level, quickening when roused by Cardenas, registering back-to-back wins at the distance, but a slower 1:28.0 than the 1:26.3 she had clocked against non-threes on April 18.

Gary Subratie's T BRADY ran on for second after stablemate ALEXA'S DREAM tried in vain to set a cracking pace for the closer.

AMY THE BUTCHER closed a hat-trick for Cardenas on the Labour Day programme. The Panamanian went gate-to-wire in back-to-back races, landing the seventh and eighth astride SHE'S FANTASTIC and YELLOWSTONE, respectively.

Nunes had earlier opened the programme with imported SPARKLE DIAMOND, who easily split rivals in the straight to land the six-and-a-half furlong event for $1 million claimers.

Cardenas first winner was Nunes' second on the nine-race card, rallying SUDDEN FLIGHT to hold off CASUAL CHARM at five furlongs straight in the fourth for $550,000 claimers.

Dane Dawkins, who missed the first two meets of the three-day Labour Day carnival, during which Anthony Thomas established a four-win lead atop the jockeys' standings with six winners in two days, pulled one back by outfinishing his rival's I REALISE with a powerful ride aboard RUM PUNCHER in the sixth.