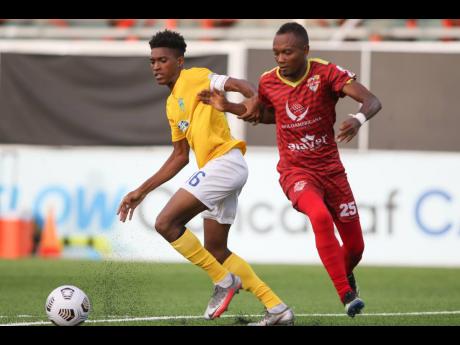 Ky-Mani Campbell (left) of Waterhouse FC getting away from Joseph Gomez of Vega Real during the third-place match in the FLOW Concacaf Caribbean Club Championship held at the Cibao Stadium in Santiago de los Caballeros, Dominican Republic, on Sunday.

Waterhouse have one last chance to get a spot in the Concacaf Champions League next year after missing the opportunity to secure that berth in Sunday night's Flow Concacaf Caribbean Club Championship third-place match.

Atletico Vega Real of the Dominican Republic secured their place in the 2023 Scotiabank Concacaf Champions League (SCL) - which will be their first-ever appearance in that tournament - when they defeated Waterhouse 3-1 in a penalty shootout, following a 1-1 draw at the Estadio Cibao FC.

Waterhouse will play in a 2022 SCL play-off tomorrow against 2022 Concacaf Caribbean Shield champion Bayamon FC of Puerto Rico, with the winner securing the final SCL berth from the Caribbean.

Early goals have been a trend in this year's Concacaf Caribbean Club Championship, and Sunday's opening match was no different with the host side grabbing a 1-0 lead in just the seventh minute of play.

Jarol Herrera received a ball down the right wing and floated in a cross that met the stabbing forehead of Mauro Gomez, who thumped home the header past Waterhouse goalkeeper Kemar Foster for a 1-0 Atletico Vega Real lead.

Waterhouse looked to get back on level footing before halftime, but they were left frustrated by the Atletico Vega Real defence.

However, early in the second half, the equaliser would come when Rohan Beadle swung in a free kick from the right wing and Cardel Benbow was there to meet it with a header, making it 1-1 in the 49th minute.

The momentum stayed with Waterhouse and the Jamaicans looked as if they would get a second goal before the full-time whistle, but Atletico Vega Real goalkeeper Juan Dominguez stood strong, resulting in a penalty shootout to decide the winner.

Atletico Vega Real were more decisive and a save from Dominguez on Waterhouse's final attempt sealed the Dominican club's 3-1 shootout victory.

Jarol Herrera, Domingo Peralta and Arismendy Jimenez scored for Atletico Vega Real in the shootouts while Waterhouse's only goal came from Cardel Benbow.