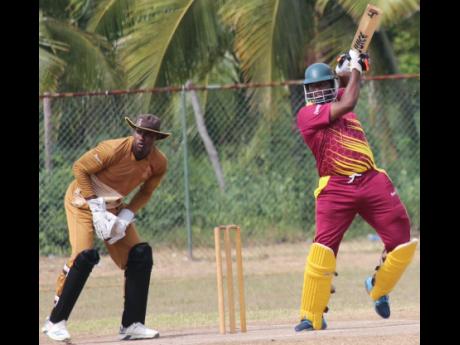 St Catherine CA opener Adrian Bartley (right) plays a shot on his way to a top score of 51 as GC Foster wicketkeeper Aaron Daley Jr looks on during their Jamaica Cricket Association All-Island 50 over encounter at Port Esquivel, St Catherine, on Saturday.

Clarendon Cricket Association remained slightly ahead of St Mary Cricket Association in the Jamaica Cricket Association All-Island 50 Over competition at the weekend. Clarendon now lead St Mary by net run rate in Pool 2 after round five matches when they secured a 78-run win over St Ann to push their points total to 13, the same as St Mary, who defeated Manchester Cricket Club by three wickets.

Both Clarendon and St Mary have four wins, with Clarendon having a 2.132 net run rate compared to St. Mary's 0.924.

In the encounter at Sir P Oval, Clarendon posted 303 all out, with Brian Buchanan top-scoring with 69, Jermaine Thomas getting 66, and Justin Walters 55, against four wickets for Nkala Tracey.

In reply, St Ann was dismissed for 225 with Damani Sewell top-scoring with 78 against five wickets for 30 runs from Thomas.

Manchester posted 205 all out at Manchester High School, with Jahheem Bartley getting 47 against five wickets for 28 runs from Tyrone Daley.

Rojae Brown then hit an unbeaten 46, and Orlando Lyons, 43, to help guide St Mary to 207 for seven in 42 overs and three deliveries. Bartley took three wickets for 44 runs.

GC Foster won the toss and decided to take the first strike and posted 263 all out. Wicketkeeper Aaron Daley top-scored with 86, with Ramon Senior getting 57 against three wickets each for Michael Bedward and Jospeh Lemmie.

In reply, St Catherine CA was restricted to 252 all out, despite 51 from Adrian Bartley. Oshane Ennis finished with four wickets for 57 runs.

It was the first win for GC Foster who lie fifth in Pool 2 with four points, while St Catherine CA remained in fourth place with six points.

Manchester are in third place with six points, with St Ann at the bottom of Pool 2 with one point.

In other matches in the round, St Elizabeth defeated Trelawny by 25 runs to maintain their lead in Pool 1 with nine points. St. Elizabeth first made 142 and then dismissed Trelawny for 117.

Lucas continue to lead Pool 3 with 13 points, with the Jamaica Defence Force leading Pool 4 with 12 points.