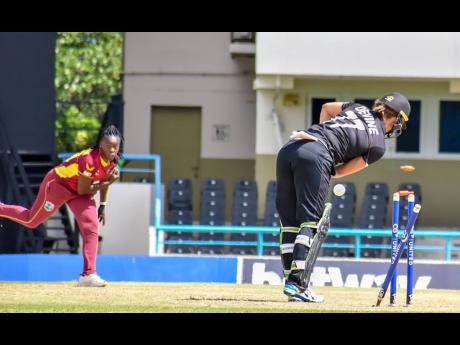 West Indies Women’s Aaliyah Alleyne (left) disrupts the stumps of New Zealand captain Sophie Devine during the third and final one-day international at North Sound, Antigua, yesterday. Devine made seven runs from 18 balls with her wicket being the only one for Alleyne. West Indies won the match by four wickets but lost the series 2-1.

Newly named West Indies Women's captain Hayley Matthews suffered a 2-1 one-day international (ODI) series defeat to the touring New Zealand in her first assignment at the helm, although she engineered a four-wicket win in the third and final match at North Sound in Antigua yesterday.

West Indies Women salvaged some pride by avoiding a series sweep after New Zealand had won the first two matches and they secured the victory with ease, as they had 38 balls to spare.

Batting first, New Zealand Women were bowled out for 168 inside 49 overs with Lauren Down leading the scoring for the Kiwis with a patient 53 from 78 deliveries.

Captain and all-rounder Matthews was the pick of the Windies' bowlers as she collected two for 23 from her 10 overs.

In reply, West Indies Women found themselves in a spot of bother in the early stages, reeling at 10 for two.

A 106 third-wicket partnership between Stafanie Taylor and Matthews kept Windies in the match, as the experienced Taylor top-scored with 51, her 37th ODI half-century, before retiring hurt.

Captain Matthews fell 10 runs short of her half-century, succumbing to Brooke Halliday on 40.

Aaliyah Alleyne, who scored 27 not out and Shakera Selman with five not out, saw Windies to victory with a 21-run partnership for the seventh wicket.

The Twenty20 (T20) leg of the series will bowl off on Wednesday at the same venue starting at 11:30 a.m. Jamaica time.