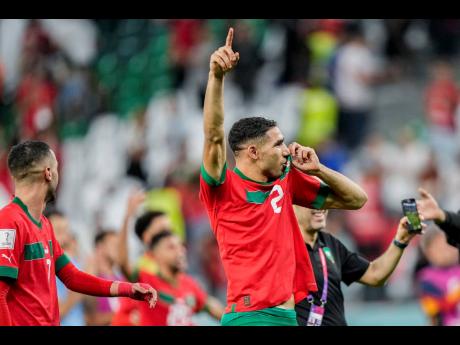 Morocco’s Achraf Hakimi celebrates his team’s victory at the end of the World Cup round of 16 match between Morocco and Spain, at the Education City Stadium in Al Rayyan, Qatar yesterday.

The first World Cup held in an Arab nation has produced the Arab world's first quarterfinalists.

Morocco became only the fourth African country to reach the quarterfinals at the biggest football tournament in the world by beating Spain 3-0 in a penalty shootout after a 0-0 draw through extra time.

The Moroccans were playing in only their second knockout game at a World Cup, an event which is being held in the Middle East for the first time in its nearly 100-year history.

"Right now is a special moment for all Africa, for all the Arab countries, for all the Muslims around this world," Morocco midfielder Azzedine Ounahi said. "You try to make them happy, try to make ourselves happy. And I think it goes quite well."

The World Cup in Qatar is the first to be played in the Arab world and only the second to be held in Asia. The tournament began with one of the biggest upsets in history when Saudi Arabia beat two-time champions Argentina on the third day of action.

The Saudis were eliminated, as were hosts Qatar and Tunisia, in the group stage. That left Morocco as the Arab world's standard bearers.

"I'm very proud of my fans, of my people and Arabic people," said Morocco coach Walid Regragui, who is the first African to coach an African team to the quarterfinals.

Achraf Hakimi, who was born in Madrid and previously played for Real Madrid, converted the deciding penalty in the shootout. Abdelhamid Sabiri and Hakim Ziyech, who returned to the national team after a dispute with the previous coach, also scored.

Morocco have been the biggest surprise of the tournament and will next face Portugal in the quarterfinals on Saturday.

Morocco who have a complex geopolitical relationship with close neighbours Spain, advanced from a difficult group that included Canada, 2018 semifinalists Belgium, and 2018 runners-up Croatia.

Morocco, who also reached the round of 16 at the 1986 World Cup in Mexico, are also the only team from outside Europe or South America to make it to the last eight in Qatar.