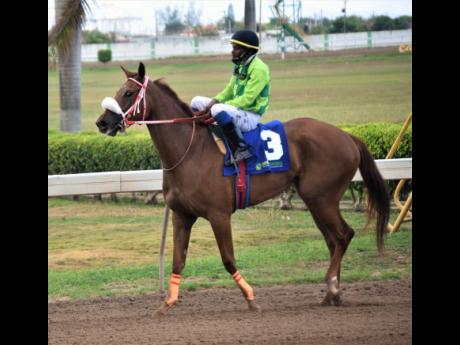 MUM, partnered by interference-prone Aaron Chatrie, was well on her way to overcoming a horrendous draw and the handicaps from post-position one, collaring the pair of HEART OF THE SEA and I'VE GOT MAGIC, but cut across rivals close home, resulting in her being disqualified and placed third.

Though running out a clear winner at the end, the stewards had no choice but to take down MUM's number, awarding the four-and-a-half furlong straight race to I'VE GOT MAGIC, who narrowly beat HEART OF THE SEA.

Now better drawn at post-position six, MUM has far less to do and will appreciate the added half-furlong, providing Chatrie keeps his cool and left hand in check.

ALEXA'S DREAM, who reported off a five-month lay-up to run a big race for fourth, gets an easier leg in division two and should go all the way with Dick Cardenas.

Meanwhile, LIGHTNING MCQUEEN's second-place run behind WILSON, though beaten by 13 lengths, must be a huge marker race for the six-year-old gelding, who came off the turn a length behind the runaway winner, almost carrying the field for the first half-mile.

Returning among $1m claimers after WILSON went up in class to finish a squeezed-for-space fourth along the rail - behind NUCLEAR NOON, ALEXA'S LODGE and DEEP BLUE SEA - LIGHTNING MCQUEEN should be the catch of the day on Monday at five and a half furlongs.

Though the likes of PRINCE CHARLES, PEKING CRUZ and MR UNIVERSE all boast back class, their form is highly questionable when put to the microscope.

PRINCE CHARLES, once a fearsome run-on sprinter, has gone south since claimed from Anthony Nunes in March. Listed as 'erratic' in his last two starts, the five-year-old gelding obviously has issues which Steven Todd has not been able to rectify in seven outings.

PEKING CRUZ, another once-lethal sprinter, won first-time-off-the-claim for Ian Parsard after being taken from Richard Azan. However, it took Parsard two months to get the six-year-old back to the races for that win. It has been five months since PEKING CRUZ's new connections got one run off the claim from Parsard.

MR UNIVERSE, possibly for the first time in his career, 47 races, had more than two horses in front of him at the start of an event, when last out at five furlongs straight on October 31. The once-feared speedster was actually running on a $750,000 tag, now stepping up to $1m and departing from what has become his favoured five-furlong straight trip.

LIGHTNING MCQUEEN's consistency in his last seven races, four victories and two second-place finishes, makes him the marker horse of the season. Note how KHOLBEAR has not run a bad race against non-winners-of-three since finishing second to LIGHTNING MCQUEEN at six furlongs in September.