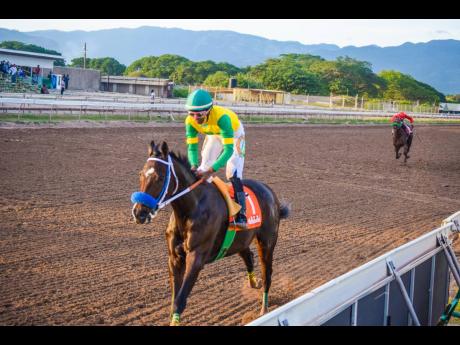 BIG JULE with Omar Walker aboard.

BIG JULE's out-of-class display against second-string three-year-olds catapulted the in-utero colt into another sphere, which he should underline in Sunday's restricted stakes at a mile, despite picking up five pounds for his nine-length demolition of the same cast at nine furlongs and 25 yards a month ago.

Making his bid at the half-mile marker with Omar Walker, BIG JULE went by IANNAI LINKS within a half-furlong and hit overdrive coming off the home turn to leave UNRULY BOSS standing, opening up a commanding lead to clock 1:55.1.

Touted as Ian Parsard's derby horse well ahead of his winning debut in April, even more so after an 18-length victory at nine furlongs and 25 yards in June, BIG JULE, already lacking in preparation, missed his prep race mid-July and took on the best three-year-olds, very much under prepared, three weeks later at 12 furlongs.

With the derby deck stacked against him, BIG JULE straightened second behind FURTHER AND BEYOND but found nil when asked for an extra effort by Walker. It was more of the same a month later in the Winston Griffiths at nine and a half furlongs, chasing REGAL AND ROYAL into the lane but not carrying through his run, leaving SANTORINI to outbattle BILLY WHIZZ.

However, it was a reprogrammed BIG JULE who turned up November 20, signalling his intentions with a bullet 1:28.4 for seven furlongs at exercise, slamming third-place SANTORINI by close to 11 lengths, an 18-length reversal of form on the Winston Griffiths winner.

Having found his mojo, the Tapizar-Blues In The Grass colt appears to have Sunday's line-up in a shooting gallery, six returning to the scene of the crime, with the newcomers being his own stablemate, recent-winner CLASSICAL ORB, and the filly AMY THE BUTCHER, who will be like a lamb to the slaughter.

The event is all but a stepping stone for BIG JULE, who has a score or two to settle with BILLY WHIZZ, derby-winner CALCULUS and FURTHER AND BEYOND next season.