Surrey Kings back on top of T10 league 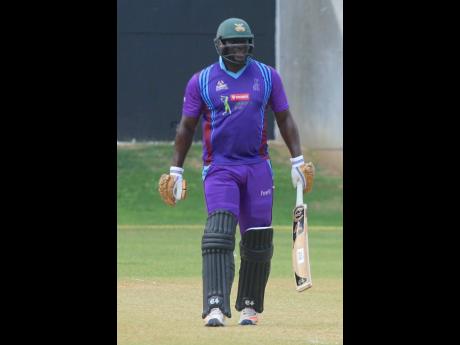 Opener Kennar Lewis top-scored with 38 for the Surrey Kings against the Cornwall Warriors in their Dream11 Jamaica T10 clash at Sabina Park in Kingston yesterday.

The Surrey Kings solidified their position to qualify for the play-offs of the Dream11 Jamaica T10, with a 23-run win over the Cornwall Warriors in their ninth-round clash at Sabina Park yesterday.

The Kings came into the game in second after they were overtaken by the Surrey Royals. However, the Jermaine Blackwood-led side quickly regained the ascendency when they posted 102 for six and then restricted the Warriors to 79 for two.

The Kings' total was built largely around a swift 38 from 18 balls from the burly opener Kennar Lewis who slammed three fours and three sixes.

Left-hander Kirk McKenzie chipped in with 31 runs from 25 balls with one four and two sixes.

The Warriors took the cautious approach in trying to overhaul the total, and they got to 48 in the seventh over, before innings top scorer Ockeeno Farquharson was caught by Shalome Parnell off Kenroy Williams for 31 off 27, with four fours and a six.

Parnell was the pick of the bowlers with one wicket for 13 runs from his two overs.

Jeavor Royal, who was awarded the Man of the Match, said the team's plans played out perfectly in securing the win.

"We knew we had enough runs on the board and we planned to bowl into the wicket and let them hit into the wind and they did just that," he said. "We are looking to go all the way because we fear no team, we have the strength in all departments. We hope to come out victorious in the remaining games and win this championship."

In the second game of the double-header, the Middlesex Titans defeated the Surrey Risers by four wickets. The Risers first made 73 for six with Delbert Gayle top-scoring with 19 while Ricardo McIntosh got 15 against two wickets each for Krishmar Santokie and Errol Thomas.

In reply, the Titans inched their way to 74 for six in nine overs and four balls, with Wayne Davis leading the way with 17 against two wickets for Akim Fraser and Gordon Bryan.

The Titans remain in fifth place with 10 points with the Risers still at the foot of the table with nine points.